Oily skin, shine, blackheads, white pimples, inflammation, and scars … More and more common in adults, acne wreaks havoc on all skin types, particularly in women. Do you have stubborn teenage acne that haunts you into adulthood? Do you see your first comedones appear after 25 years? You have joined the club of adults affected by this unsightly pathology, certainly, but widespread.

If the causes of acne are multiple, all have in common an epidermis whose sebaceous glands produce too much sebum. Present under the skin at the base of each hair, the overproductive sebaceous glands accumulate sebum, which ends up forming a “plug”, or black spot, under which various bacteria and dead skin debris are trapped. These bacteria feed on sebum and are therefore in heaven! A vicious circle then begins, encouraging their proliferation under the skin, inflammation of the epidermis, and the appearance of white spots. In turn, these buttons are the source of sores, beds of new lesions favorable to an acne condition. This condition also causes scars that take years to disappear.

Before tackling the treatment of adult acne, it is important to create a dermatological environment that promotes skin balance and healing. For that : 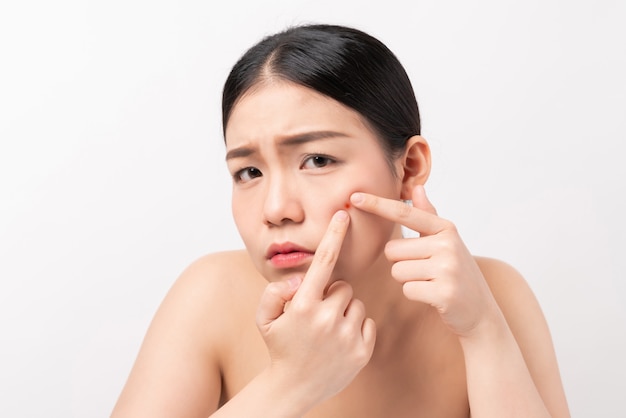 Cleanse your skin twice a day, morning and evening

This step is important because it limits the number of impurities that accumulate on the skin and are trapped by the sebum.

The sebum is secreted by the skin in a state of alert, which tries to protect itself, it is useless to attack it even more by using a stripping product. Prefer a gentle cleanser, suitable for acne-prone skin

Moisturizing the skin, even oily, is a daily reflex. Your oily skin may seem largely hydrated, but make no mistake: the production of sebum is on the contrary a sign that your skin is dehydrated …

However, be careful in choosing your moisturizer: too rich or occlusive, a moisturizer that is not made for acne-prone skin may do worse than better. Favor fluid and light textures quickly absorbed.

Are you on anti-acne treatment?

Use a so-called “compensating” cream, which hydrates the skin following a dehydrating anti-acne treatment. Often based on retinoids or benzoyl peroxide, the drying effect of these treatments is offset by creams specially designed for acne-prone skin, which do not clog the pores and provide lasting moisturization:

Have you scratched or pierced a pimple? Bad idea! Without being tampered with, a pimple takes an average of two to 4 days to disappear. If you touch it, you multiply that duration by two. Not to mention the risk of scars, which will take months or even years to fade. If the damage is done, use a healing cream that will cleanse the wound without drying it out and speed up healing. To fully benefit from the benefits of these creams, apply them before nightfall, to combine their action with the natural regeneration of the epidermis.

Choose the best baby shampoo for your child

How to Lighten or Bleach Hair at Home Without Bleach

10 Reasons why you should Prefer Buying Eco Eyeliner Packaging Boxes